In everyday talk, it is called self-harm when an individual intentionally injures or harms themselves without intending to die. It is most common for people to cut or scratch their skin when they harm themselves, but various behaviour can be classified as self-harming. The causes of self-harm can be various and subjected to the individual. Not everyone who self-harms has thoughts of wanting to die. People often start to harm themselves to try to control difficult emotions or to relieve accumulated stress. Self-harm can thus provide temporary relief to begin with, but people will soon feel more distressed. Self-harm is also often accompanied by shame or guilt, which causes further distress. Increased distress increases the likelihood that people will harm themselves, thus sustaining a vicious circle of self-harm. Around 10% of young people worldwide have self-harmed at some point.

Self-harm with the intent to die is generally called a suicide attempt. The person causes themselves some kind of harm with the intention of trying to die. People who attempt suicide have often had thoughts of wanting to die before, but not all of them. There are two kinds of thoughts of wanting to die. On the one hand, death thoughts, which are thoughts of not wanting to exist any longer, but not direct thoughts of or the will to cause one's own death. Thoughts of suicide are thoughts of wanting to cause one's own death in some way. Both death and suicidal thoughts can be symptoms of depression, but not everyone who experiences such thoughts is depressed, and not everyone who is depressed will experience death or suicidal thoughts. Thoughts of death and suicide are more common than many people think, but about one-third of girls and one-quarter of boys in Iceland in 2016 have considered suicide at some point. It is important to know that it is possible to receive appropriate assistance when such thoughts arise.

How do self-harm and suicial thoughts manifest themselves?

Self-harm is a common problem, especially in adolescents and young people. About 10% of young people have harmed themselves at some point in their life.

Self-harm often starts as a way to vent or relieve difficult or painful feelings. The person then experiences temporary relief. Very soon, negative feelings emerge again, and self-harm often comes with feelings of shame or guilt. Thus, a vicious circle is formed which is sustained with greater self-harm. 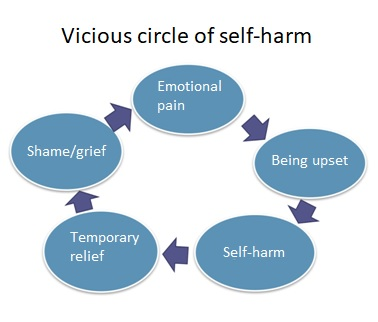 Self-harm is manifested in various forms and it is not just when people cut themselves on the forearm as many think. Self-harm can also be behaviour such as burning, tearing hair, punching or kicking walls or furniture, deliberately trying to get in fights, skin piecking, banging your head against walls or objects, beating yourself or taking large doses of drugs. It can also be important to know that self-harm often occurs differently in girls than boys. For example, boys are more likely than girls to try to get in fights or punch things or walls.

Self-harm never solves the causes of the original pain, and so self-harm is consideredspoken of as an unhelpful remedy for emotional problems. It is important to get help both to stop the self-harm and to solve the underlying problems that caused the self-harm to begin with. It is possible to learn new resorts to vast distress, difficult feelings or memories, that are more helpful and do not involve the same danger as self-harm does. Self-harm also always involves certain risks, such as infections or that self-harm goes too far so that it becomes life-threatening and can even cause death even though it was not intended. The first step in recovery is to always tell someone and ask for help.

Thoughts of death are thoughts of not wanting to exist anymore, wishing never to have been born or hoping to end up in an accident or illness leading to death. There are no direct thoughts of causing one's own death by any means. Thoughts of death can be the result of chronic stress, anxiety or depression. They can also arise following great difficulties in life. They often come with a certain lack of hope, thoughts of the situation never getting better and feelings such as anxiety, irritability or anger.

Thoughts of suicide are thoughts of wanting to die, but they are different from death thoughts because people also think of wanting to cause their own death. Such thoughts often involve speculations on various methods that they could use and some people start to look for information on methods. Some people start to make plans on how to commit suicide or decide on one method or timing. Then, some even begin planning the process, getting what is needed or saying goodbye to loved ones. Thoughts of suicide are sometimes the consequences of mental disorders and can, for example, be symptoms of depression. As with thoughts of death, suicidal thoughts can also be the result of long-term stress, trauma or other difficulties. So everyone can experience suicidal thoughts at some point, and sometimes it is even a natural reaction to a great deal of distress or difficulties. However, it is very important to tell someone when such thoughts arise. Although self-thoughts can be a natural reaction, they are always a sign of distress or great difficulties, and it is important to know that they will pass and it is possible to assist with any problem that is causing these thoughts.

Where to reach out to?

If you or someone you know is self-harming or has death and/or suicidal thoughts, it is very important to talk to someone you trust and preferably a professional. Thoughts of suicide are a common problem and can be a natural reaction to a lot of stress or distress. It is possible to get good assistance with problems such as self-harm and suicidal thoughts.

For example, you can reach out to:

A more detailed list of resources in Iceland can be found here.